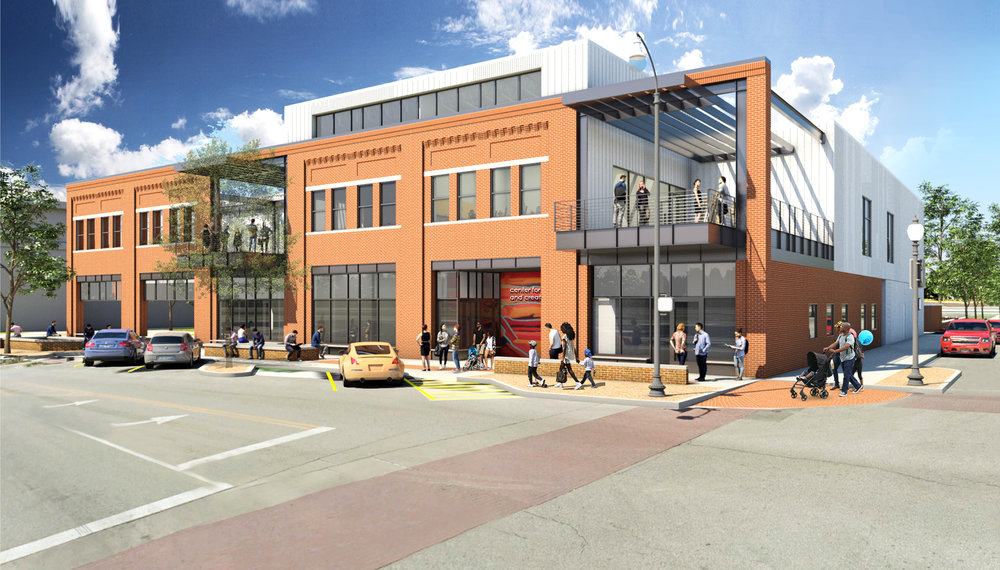 A Gathering Place for Local Artists and "Destination Point" for the City of Broken Arrow.

Representatives from AVB Bank, ArtsOK, the Brown-Kimbrough family, and officials from the City of Broken Arrow broke ground November 18th, 2020 on the Center. The ceremony was held at 302 South Main Street, the future site of the 15,500- square-foot facility and the former site of AVB Bank. The city is working with ArtsOK, the non-profit that will occupy the facility, on a use agreement and programming. Manhattan Construction will build the facility at a cost of $4.7 million paid for by voter-approved 2014 General Obligation Bonds, Vision 2025 funds, and Sales Tax Capital Improvement (SCTI) funds.

Click to see more about the Center: Ground Broken for Brown-Kimbrough Center for Arts, Innovation, and Creativity

In 2014, ground was broken for a new AVB Bank location to be constructed in the "Heart of the Rose District" at 322 South Main Street, on the corners of Main and El Paso Streets. As AVB Bank was scheduled to begin construction on a new downtown facility, the closure of the original AVB location created opportunities for Broken Arrow and the Rose District to explore the development of the Center at 302 South Main Street (corners of Main and Dallas Streets). AVB offered the property to the City of Broken Arrow, and, bond funds were, again, approved by voters, as the proposed site for the Center was altered.

AVB’s downtown drive-thru structure and lanes were demolished and the property was deeded to the City in 2019.

When demolition began on the structure located at 302 South Main Street, it was initially disassembled with much care. The original 25-foot corner (Dallas and Main Streets) was suspected to house some of the original 1905 structure...and the Bank worked, piece-by-piece, to uncover, preserve and document 115-years of history. Demolition was completed during summer of 2020.

While AVB history was being preserved, the vision of the Center was becoming a reality - to be the regional hub for innovation and creative arts incubation and production. The belief is that the Center will be a true “destination point” for Broken Arrow citizens and citizens of surrounding communities, as well as bring people from across the country to Broken Arrow for the unique creative opportunities which may not be available otherwise. And, AVB Bank is proud to be a part of this project and excited for the impact it will have for our City.

It is anticipated for Phase One to include a gallery exhibit hall, film and sound studio, workshop areas and classrooms for ceramic, sculpting and other arts, catering kitchen and gift shop. Phase Two is expected to include a large event space and additional project classrooms.

Click to learn more about the Center:  Center for Arts, Innovation & Creativity.